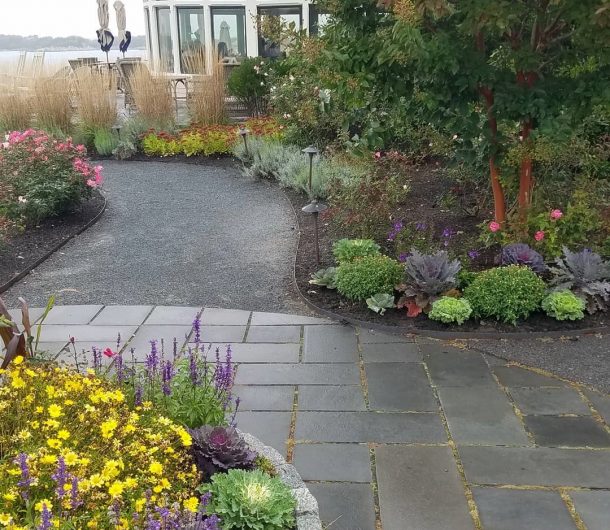 Autumn is a special time in New England. The cooler temperatures and shorter days set in motion a scene change from green-washed surrounds to a new pallet of oranges, yellows, reds and umbers.  Here, in Newport, we get to experience the full display of this transitional season. From the fall foliage and unique autumnal blooms, to the collections of decorative pumpkins, gourds, kales, cabbages and ornamental grasses. On site at Castle Hill we have added a nice assortment of autumnal plants. The chrysanthemums (often simply called “mums”) are locally grown and have just begun to pop open. Among my favorite varieties are the deep pink ‘Wanda Purple’ and the bright ocher ‘Makenna Orange’. Both varieties will flower until the first frost and add a welcomed burst of color as the season of blooms comes to an end. In addition to the mums we also have a variety of heirloom gourds on display; like the orange and green striped Kakai pumpkin and the bumpy blue Marina Di Chioggia. These heirloom pumpkins are both interesting to behold and delicious to eat. The Marina Di Chioggia is named after a fishing village south of Venice, Italy, where this unique squash became popular in the late 1600s. Originally from South America, the large deep blue pumpkin has a sweet orange interior and stores for up to six months after harvest. These traits made it a favorite for winter meals, and it is still served along the canals of Venice today, where bargemen are known to grill up wedges coated in olive oil. Yum! Along the entrance fence cheery Montauk daisies are in full bloom, and nearby the red winterberries have begun to glow in the slanted afternoon light. Birds are starting to harvest the berries, and bees are making their final rounds of everything in flower as they stock up on food for the winter. Already it is apparent the bees are slowing down, and some mornings I find them frozen in place until the sun warms them enough to revive and fly away. Utilizing in season produce as usual, the culinary team has added new items to the dining menus. Yesterday I was privy to the sight and smell of a perfectly buttered, toasted, and presented grilled cheese with cheddar, bacon, and shaved pear on cranberry bread. Lo and behold, nestled beside it was none other than a dainty dish of pumpkin bisque! The perfect autumn lunch. It smelled divine and now I know what I’ll be ordering next time I sit down at The Lawn Restaurant!