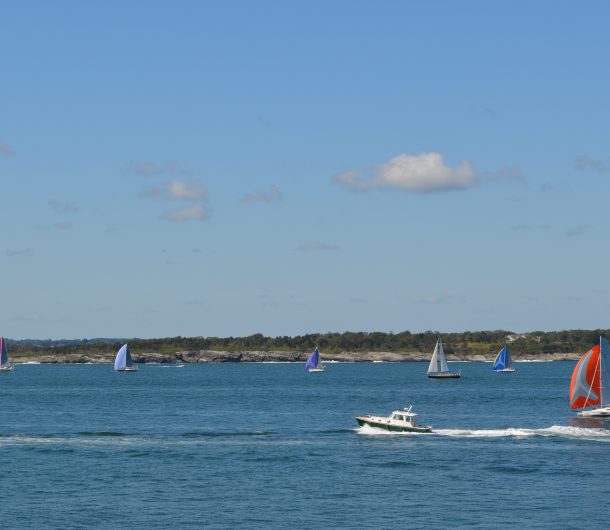 Newport is the sailing capital of the world, and there is no better place to watch the sailboats floating by, or racing by, than at the Castle Hill Inn, but there is much more to the daily boat show. Located, as we are, on the East Passage of Narragansett Bay, a panoply of marine traffic passes close by us on its way to Providence, Quonset Point, the Naval War College and into Newport Harbor. Narragansett Bay is the largest estuary in New England, and only the East Passage, because of its depth and breadth, can accommodate all the vessels that come to Rhode Island for business, pleasure or public education.

Those picturesque sailboats often must navigate around much larger vessels, which can make for some interesting spectacles. Sometimes you tack away from an oil tanker only to have to dodge a tall ship! With the presence of the Naval War College across the harbor, we sometimes get a great look at state-of-the-art military warcraft. This past September, the USS New York was in town for the International Seapower Symposium. This amphibious transport dock was commissioned in 2009 and contains millions of tons of World Trade Center steel. It’s hard to miss when a thing like this is coming down the pike. Just watch out there, sailboats. Everything will be back to normal in a few moments.

It’s not every day that such a modern marvel passes our way. It can be quite amusing trying to figure out what is approaching in the distance, until it passes directly in front of us. Even then it might be hard to believe your eyes. Take Air Force One for example… that came floating by on a barge… Did it, really?! It sure looks like it!… Turns out it is a replica that was on display at Quonset Point in North Kingstown. It caused quite a stir the afternoon that it passed by Castle Hill. We love these unscripted moments that seem to us as if they were utterly produced by magic.

The draw of Newport is great, and visitors come to us from every corner of the world. Witness the cruise ships that populate the harbor especially in the early fall. The passengers don’t normally make their way out to us at Castle Hill, but we enjoy watching these great ships pass out of the harbor and thinking, well, we’re fine just where we are.