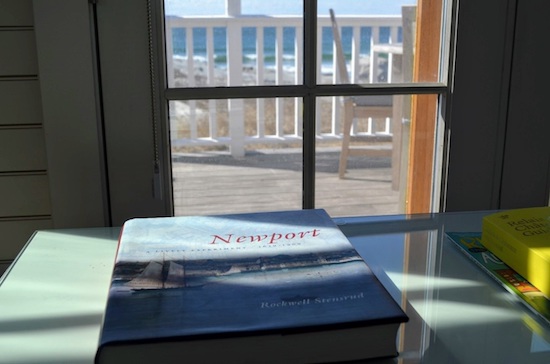 City by the Sea Syllabus

As the sun sets earlier and the winds begin to blow in a chillier aspect, perhaps it puts you in the mood to settle down with a good book. For those longer nights, we have put together a list of good reads pertaining to the City by the Sea that we thought a traveler to the Castle Hill Inn might want to peruse before, during, or after their stay with us. Most are available through the Newport Mansions Stores, online at newportstyle.net, or through other online retailers.

A comprehensive examination of Newport from its founding in 1639 until 1969. Learn about the Golden Age, the Gilded Age, in-between and beyond, in this wonderfully illustrated history of the City by the Sea.

The unfolding of the great story of American architecture can be found right here in Newport from the colonial to the commodious.

A Season of Splendor: The Court of Mrs. Astor in Gilded Age New York Greg King 2008

Caroline Schermerhorn Astor was the undisputed Queen of New York and Newport Society during the Fifth Avenue mansion-boom and Bellevue Avenue cottage-boom in the latter part of the 19th century and the earliest part of the 20th century. This book illustrates the lavish Gilded Age lifestyle that she developed and many emulated.

Possibly the most indomitable spirit in New York and Newport Society (and one of the first female members of the American Institute of Architects), Alva designed Marble House along with Richard Morris Hunt, divorced her husband Willie K. Vanderbilt and married his friend, fellow million-heir O.H.P. Belmont. She wed her daughter, Consuelo, to the 9th Duke of Marlborough in 1895 and later became a suffragette. Consuelo became a social activist as well, across the pond, and was a lifelong friend of Winston Churchill – her cousin by marriage. She finally married for love in 1921 to Jacques Balsan, a dashing French aviator.

Vanderbilt: The Rise and Fall of an American Dynasty Anderson Cooper 2021

Anderson Cooper’s mother, Gloria, was the only child and heir of Reginald Vanderbilt, the youngest son of Cornelius II and Alice Vanderbilt, who built the Breakers – the grandest mansion in Newport.

A semi-autobiographical tale set in Newport in the 1920s, providing an interesting take on the “Nine Cities of Newport”. Thornton Wilder was a frequent early guest of the Castle Hill Inn when it opened for operations in the 1940s. In the novel, the protagonist describes the view from what is now our premiere turret suite.

The Turret Suite sits atop it all on the third and fourth floor of the Inn.

This surprising fast-moving storm destroyed nearly everything that was directly on the southern shore of Rhode Island. At Castle Hill, the waters of the ocean rose up and met those of the cove on the east side of the property transforming the peninsula temporarily into an island. This frightened the chatelaine of the house so thoroughly that once she was able to vacate the premises, she vowed never to return.

The Age of Innocence Edith Wharton 1920