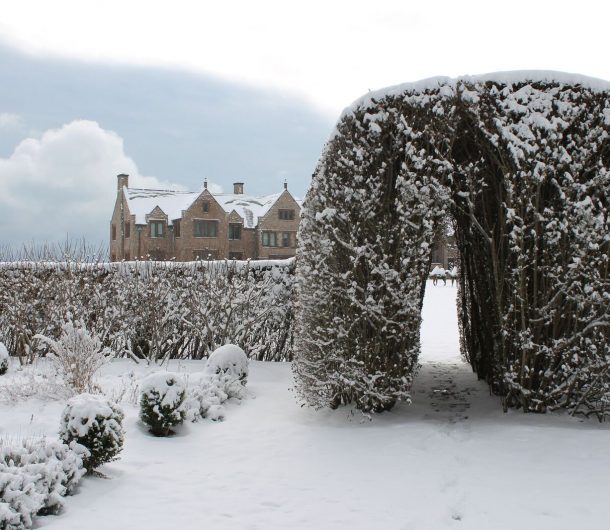 Newport is alive with history. And history gives us tradition. Traditionally, the holiday program of the Newport Restoration Foundation (newportrestoration.org) has featured Rough Point in “Undecked Halls” – reflecting the state of the house in winter, when its chatelaine, Doris Duke, had decamped to other climes. This year, they have added another element, with certain spaces dressed up for the Christmas holiday and others cloaked in their winter coverings.  Together, these spaces tell the story of Doris’s holiday traditions and the off-season routines of one of Newport’s famed summer cottages. Originally built for Frederick Vanderbilt in 1891, the estate, with grounds originally designed by Frederick Law Olmstead, was purchased in 1922 by James Buchanan Duke – tobacconist and benefactor of Duke University – as a summer home for he and his family: second wife, Nanaline, and their daughter, Doris, who was 10 years old at the time. The completion of a renovation and enlargement of the house by architect Horace Trumbauer just preceded Mr. Duke’s death in 1925. Doris was the sole heir of the vast Duke fortune, with her mother being given lifetime privileges at Rough Point, the 2500-acre Duke Farm in New Jersey and the family manse on Fifth Avenue in New York. Doris became known as the richest little girl in the world. Rough Point was the scene of Doris’s debutante ball in 1930, in the 2000 square foot ballroom that was added by Trumbauer to facilitate her mother’s social aspirations. Today the house is presented by the Newport Restoration Foundation largely as Doris left it. She became interested in the Rough Point estate beginning in the late 1950’s, when she bequeathed the family’s New York City mansion to New York University, and relocated many of its contents to Newport. Doris transformed the ballroom into an enormous sitting room called the Music Room. A similar treatment was given to the formal dining room. Originally furnished with a table that could seat forty, Doris installed a smaller table and created conversational sitting areas. By that time, formal entertainments were out, and cocktail parties were in. Not that Doris was all too much for convention. Summering with her at Rough Point in the late eighties and early nineties were two camels named Princess and Baby. Camel topiaries were added to the grounds in 2008 to commemorate these past residents. In addition to its stunning setting and rich architectural and social history, a visit to Rough Point is always worth it, just by virtue of its art collection. From five-hundred-year-old tapestries to Renaissance and Flemish paintings as well as exquisite eighteenth century English portraits and more so much more… If you have never been, you will be dazzled from the moment you drive in the gate; or if you have, you don’t want to miss this special program by the Newport Restoration Foundation. They do an outstanding job of using the house and their staff to tell the story of a Rough Point Holiday. The remaining dates are Saturday December 8th, 15th and 27th from 10am to 4pm with the first floor open for roaming and guided tours available on the half-hour. Visit newportrestoration.org for more information.

Posted on December 4, 2018 by castlehillinn