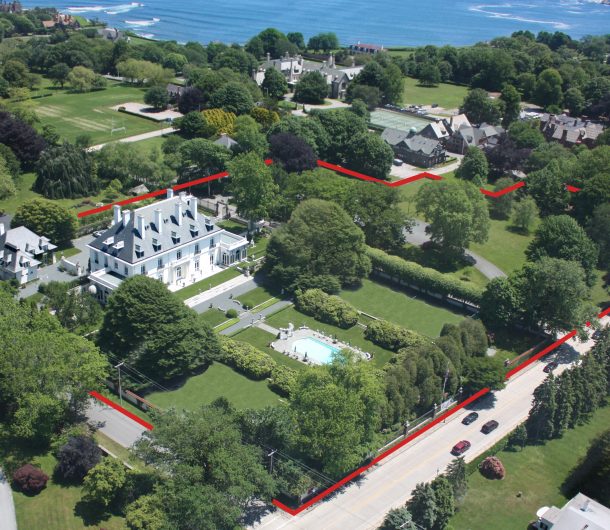 Bellevue Avenue in Newport, Rhode Island features almost too many museums to list – from the International Tennis Hall of Fame Museum and the Audrain Automobile Museum on upper Bellevue to the several properties of the Preservation Society of Newport County that line the length of this august boulevard. These latter are house museums and are part of the reason why Bellevue retains its opulent residential character; then there are two which are true art museums, albeit within a house. These are the National Museum of American Illustration and the Newport Art Museum.

The National Museum of American Illustration is housed within Vernon Court (1904) – a glamorous chateau design by the architectural firm of Carrere and Hastings (who also designed the New York Public Library at 42nd Street) and the interior design firm of Jules Allard (who also designed the interiors of the Marble House, the Elms and Rosecliff – all house museums on Bellevue).

The National Museum of American Illustration offers a self-guided tour by use of tablets which provide an overview of each space, narrated by CEO and co-founder Laurence Cutler, as well as more in-depth information of the museum’s artworks, provided by Museum Director and co-founder Judith Cutler. This personal touch by the Cutlers adds to the homey feel of the place, despite its outsized proportions, as do the many works by Norman Rockwell. While most people are familiar with Norman Rockwell, it is a great pleasure to see the original paintings of his many Saturday Evening Post covers, as well as the works of JC Lyendecker, N.C. Wyeth, Maxfield Parish and others. As Mr. Cutler says in his intro to the museum, the story of American illustration is the story of America, and you certainly get that feeling when you are there. If you are heading to Newport for the weekend you might want to make this your first stop, as regular operating hours are restricted to Fridays from Labor Day to Memorial Day weekend.

The Newport Art Museum was founded in 1912. The main building, the John N.A. Griswold House, completed in 1864, was designed by Richard Morris Hunt and is a National Historic Landmark. It is more chalet than chateau. In the parlance of architectural history, it is the premiere example of Modern Gothic or the American “Stick-Style”. In addition to the main building, there is the Cushing Memorial Gallery completed in 1919 and the Coleman Center for Creative Studies which houses the museum’s school. The combination of the three has been contributing to the culture of Newport for nigh on a century.

With the juxtaposition of poky rooms in the original mansion with vast modern exhibition spaces and a collection that spans from American colonial to international contemporary, the experience of your visit is sure to delight. Aside from the museum experience, you can learn about the Griswold House by downloading a tour onto your phone.

Local artists and subjects are a definite focus of the permanent collection as one would expect from the Newport Art Museum, but as with any great museum, a world view emerges. This is evidenced by the current exhibits: The Shape of Birds: Contemporary Art of the Middle East and North Africa and Lalla Essaydi: From the “Converging Territories” to “Harem Revisited”. The museum has regular hours every day of the week except Monday, as well as artists’ talks, film screenings, lectures and performances scheduled throughout the year.