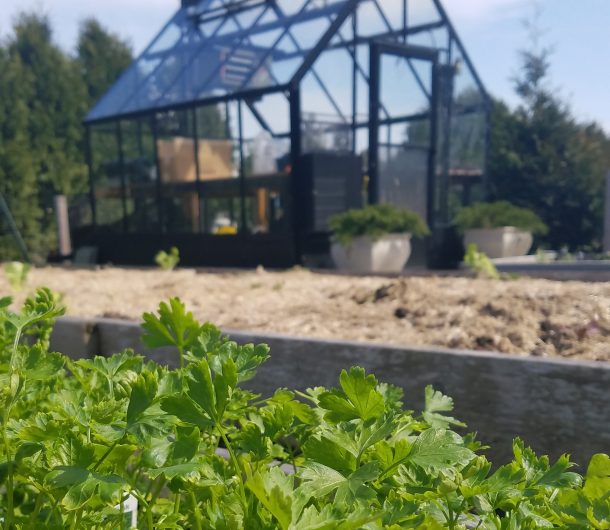 The Castle Hill Culinary Garden is entering its second season and we are off to a great start!

Seeding has begun in the greenhouse and now that nighttime temperatures are consistently above freezing there are a handful of plants ready to brave the cool air. Among these cold-hardy contenders are Russian and Siberian kale, sugar snap peas, leeks, chives, lettuce and broccoli. Violas are the first of the edible flowers blooming in the culinary garden this year. These beautiful blossoms have a delicate, slightly sweet flavor and have the added bonus of being rich in antioxidants and immune-boosting properties. We have a wide range of shapes and colors including the deep purple and yellow variety also known as ‘Johnny Jump Ups’; these are an heirloom type that is quite hardy and known to self-seed and perennialize in New England.

In the greenhouse other seedlings continue to grow in waiting for warmer weather: early cucumbers, jalapeños, parsley, cilantro and trays of colorful microgreens. Yep, that’s right- super fresh microgreens are back! In addition to the microgreens and veggies that did so well last year, Executive Chef Lou Rossi and I have come up with a few new additions. The one I am most excited about is the “watermelon radish” which, true to its name, resembles a mini watermelon. With its light green exterior and pink center it is sure to make a beautiful addition to the fine dining plate. Along with new varieties of produce we are also adding a new way to compost. Food scraps from the kitchen will continue to be composted off site by The Compost Plant and now we will have two ‘Hungry Bins’ for scraps from the garden. Hungry Bins are compost bins specially designed to house worms (yes worms!). Vermiculture or ‘vermicomposting’ is the process of creating compost using worms to break down organic matter.

Worms are especially good at turning food waste in to rich compost that can be mixed in to garden soil. It’s likely I will be writing on this topic in the future so I will leave it at that for now. If you are curious to know more keep an eye on this space! At Castle Hill, and throughout Newport, the daffodils are finally open. Magnolia blooms and yellow forsythia are also on display. Keep your eyes out for these springtime blooms and the spring time produce as summer, with its own chapter of plants, will be here before we know it!