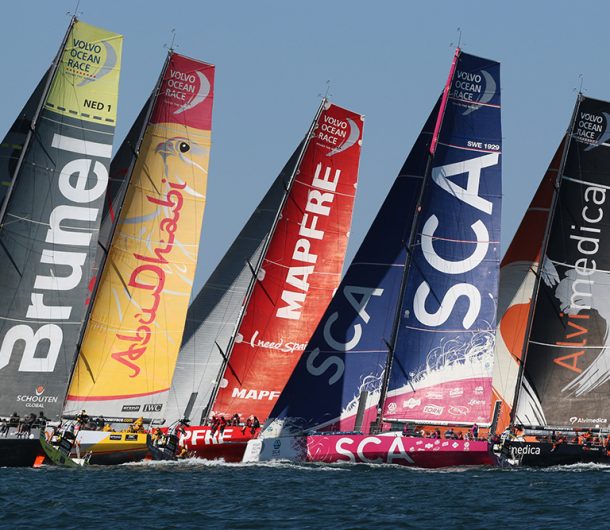 Some things are made for each other: peanut butter and jelly, ham and cheese, sailing and Newport — it is why the New York Yacht Club erected its very first clubhouse here in 1845 and the America’s Cup Races were held here for a period of over fifty years. And it is certainly why the Volvo Ocean Race has returned this spring to the City by the Sea. Newport is the only North American stop on the 45,000-nautical mile race around the world.

The seven Volvo Ocean 65 racing yachts with nine to eleven crew members are expected to sail into Newport Harbor on May 11, wait…they are already here?… well, that was fast! Trade winds you say? Oh, I see. The boats will be, I mean they currently are, on display at Fort Adams State Park. The in-port races will be held on May 19 in Newport Harbor and the East Passage of Narragansett Bay, and the ninth leg of the eleven-leg race will commence on May 20 when the boats sail out of Newport on their way to Cardiff, Wales.

Fort Adams, where the race village is set-up, dates to 1799 when it was named for the president of the United States at the time, John Adams. After the War of 1812, it was re-fortified as part of the third system for US fortifications, leaving it as the second largest and the most complex fortification system in America upon its completion in 1857. No one could have imagined back then the uses that it would be put to, as the home of the annual Newport Jazz and Folk Festivals, and now the hub of land-based activity for the Volvo Ocean Race. On-site there will be interactive displays for all age groups, and the opportunity to learn all about the boats and sailors, with the important underlying theme of ocean sustainability.

For the sailors, the experience at sea is the furthest imaginable thing from pleasure boating and comfort, as the trek travels through the most treacherous parts of the Southern Ocean, and they are allowed only one change of clothes. There is no prize money for the winners of the Volvo Ocean Race — only the prestige of conquering one of the world’s greatest and most arduous sporting events.

The current standings of the race overall have team Mapfre in the lead with the nobly named Turn the Tide on Plastic at the bottom of the scoreboard.  Whatever the statistics may be, the presence of the race is a win for Newport, where sailing will always be a part of the soul of the city, and there is no better viewing platform during the Volvo Ocean Race stop and all season long than the Lawn and Terrace at Castle Hill Inn.