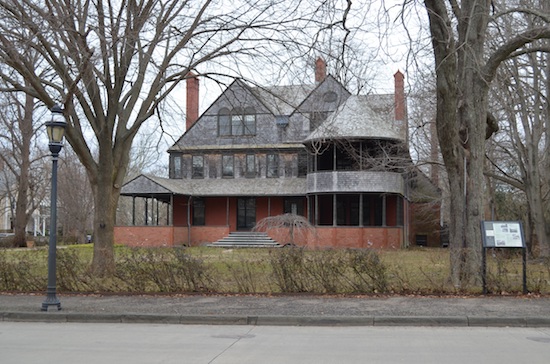 The Bellevue Avenue and Ocean Drive Historic Districts are indeed not that old. They have almost no colonial aspect, as you find Downtown, on Historic Hill, or in The Point sections of Newport. They are, however, the most spectacular! Winter is a great time to discover these areas by car, along the so-called Ten Mile Drive, with the added benefit of off-season traffic, and enjoy the sights of stunning Gilded Age architecture, which is better revealed this time of year through trees without foliage, and of course, those timeless ocean views!

With its 1875 Agassiz Mansion, 1877 Chalet, and 1890 Lighthouse, Castle Hill is the perfect place to begin. (We are the property farthest left on the vintage map above.) Turn right out of our driveway heading south. Across the way is the pristine island of Jamestown with its Beavertail Lighthouse. Beyond is the Rhode Island mainland, visible down to the lighthouse at Point Judith in Narragansett.

On your left is Brenton Park. If it is a nice day, stop in and park to get a closer look at the Monument to Portuguese exploration, walk the shore, or watch the ocean from one of the benches.

For the next few miles, you will travel along the southern shore of Newport with its rocky shoreline punctuated by sandy beaches in coves, like the one you find at Castle Hill, which is reserved for the exclusive use of our houseguests, featuring beachfront accommodations available year-round!

Try to spot these impressive private homes as you travel along Ocean Drive… and imagine the killer views they must have!

You might get lucky enough to find parking at Gooseberry Beach in the summer but the closest you will get to the ultra-exclusive Bailey’s Beach (Spouting Rock Beach Association) is the adjacent Reject’s Beach, which has no parking, and is popular with young people who walk or bike there, lacking the proper generational pedigree for the members-only Bailey’s.

In the mid-nineteenth century, real estate genius Alfred Smith went into partnership with Joseph Bailey, who owned the land from the beach which bears his name, through the heart of the Bellevue Avenue estate area, which was then transformed from farmland to divided lots for the wealthy and socially prominent to build their summer homes. An exclusive avenue in an already famous summer resort had been created just for them! The extravagance along Bellevue Avenue increased and exploded around the turn of the century when it became something of a summer Fifth Avenue, and like such it is almost entirely straight, unlike the meanderings of the Ocean Drive. Many of the houses survive today as private homes, museums, condominiums, and academic buildings of Salve Regina University.

The bottom of Bellevue, nearest the Ocean Drive, features mostly mid-nineteenth century houses on the left and turn of the century mega mansions on the right.

All is not revealed, however, on Bellevue Avenue. Following signs for the Breakers, turn right onto Ruggles Avenue. Zigzag through the streets between here and Narragansett Avenue. This area, adjacent to the Cliff Walk, is Ochre Point. You might stop here and take a tour of the Breakers. Like the Marble House, but larger, it is a former Vanderbilt summer home and a National Historic Landmark. You will also find magnificent old homes in this area that are now Salve Regina University buildings. Try to find the William Watts Sherman House, considered the prototype of the American Shingle Style of architecture.

On the Southeast corner of Bellevue Avenue and Narragansett Avenue is the headquarters of the Preservation Society of Newport County. Coming up on the left are three more National Historic Landmarks on Bellevue that are owned and operated by the PSNC.

Of the famous summer “cottages” in Newport, Kingscote was one of the very first, and remains today, behind its distinctive wooden fence. The preservation of these three properties, all operated as house museums, almost certainly stopped the tide of commercial development on Bellevue; note the shopping plazas directly to the north and east of Kingscote.

We can’t leave Bellevue Avenue without mentioning the Casino, a masterpiece of Shingle Style architecture. Its facade only hints at its depths. It was once the hub of Newport society — a place to have lunch or afternoon tea, to promenade, attend its theatre or a tennis match, have a fancy-dress ball — all while dressed to the nines. It now houses the International Tennis Hall of Fame.

Turning left from Bellevue onto Memorial Boulevard, continue on the Ten Mile Drive by way of Thames Street, following signs for Fort Adams and the Ocean Drive, travelling along Newport Harbor until we return to Castle Hill and the ocean.

Fort Adams has a fascinating history and is available for tours. Nearby is the 45-acre SVF foundation, Hammersmith Farm, and the Newport Country Club, which gives this area a wide-open feel, where time has stood relatively still for at least 100 years!

Hammersmith Farm was known as the Summer White House during the Kennedy presidency, when it was owned by the Auchincloss family, the connection being through the First Lady, whose mother married Hugh D. Auchincloss after divorcing John Bouvier. Jacqueline Bouvier and then Senator John F. Kennedy were married in Newport in 1953 at St. Mary’s Church on Spring Street, holding their reception at Hammersmith Farm.

Just before arriving back at Castle Hill Inn, you pass the Castle Hill Coastguard Station, the land for which was given as a gift by Maximillian Agassiz, son of Alexander Agassiz — who built the Inn as his summer home in 1875. Maximillian gave the land in 1938 after the Great Hurricane destroyed their Newport station at another location. The bell on display outside is the original fog bell from the Castle Hill Lighthouse.

Now you have completed the Ten Mile Drive and then some! Time to return to the timeless comforts of the Castle Hill Inn.

Posted on February 5, 2021 by castlehillinn