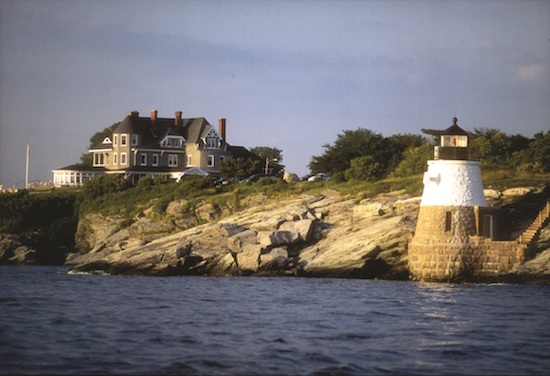 Beacons on the Bay

In the novel, Theophilus North by Thornton Wilder, a semi-autobiographical tale set in Newport in the 1920s, the main character describes “a pentagonal room in a turret above the house: from the magical room, I could see at night the beacons of six lighthouses and hear the chiming of as many sea buoys.” Wilder was a frequent guest of the Inn in its early days; the Agassiz Mansion opened seasonally for guests beginning in 1945. The room described is now our premiere Turret Suite but was actually called the Thornton Wilder Room for a time before the original turret feature — damaged in the Great Hurricane of 1938 — was restored in 2004.

Now, buoys will be buoys, but how about those six lighthouses referenced in the quote? Well, it seems Mr. Wilder knew his stuff! I have come up with exactly six that should have been visible from this magical turreted room.

2. Beavertail This lighthouse in Beavertail State Park is located at the southern end of Jamestown (Conanicut Island), whose pristine rocky coast faces our forty acres and provides most of the western sunset-facing views from Castle Hill.

3. Rose Island Tucked in close to the southern side of the Newport Pell Bridge, this romantic lighthouse accessible only by boat was built in 1870 on the remains of Fort Hamilton (yes, that Hamilton); the lower Narragansett Bay and Newport Harbor were once very heavily fortified. The Light was decommissioned in 1970 with the completion of the bridge. Rose Island was the sight of a star-studded rehearsal dinner for Jennifer Lawrence and Cooke Maroney ahead of their Newport nuptials in 2019. Today, you can arrange to stay in the house and play lightkeeper for a week.

4. Newport Harbor Light This small lighthouse adjacent to Gurney’s Newport Resort and Marina, located across the Harbor several miles northeast of Castle Hill, dates to 1842. A hotel has been on this site since the 1960s; prior to that, this light would assumably have been visible from Castle Hill, especially from the top level of the Turret, which continues to afford 300-degree views of the surrounding waters

5. Gull Rocks Light This Light, established in 1887, was abandoned with the completion of the Newport Bridge in 1969. Only a small remnant of the unique keeper’s house remains, visible from the Bridge when heading west out of Newport.

6. Castle Hill Light Based on a sketch by the famous architect Henry Hobson Richardson, this lighthouse was completed in 1890 for the entrance to Narragansett Bay and is active to this day – fully automated and maintained by the U.S. Coast Guard.

We have been working with the federal government to assume responsibility for the aesthetic exterior maintenance of the lighthouse here, since it plays such a vital supporting role for our guests, especially for our brides and grooms and their magical wedding photos.

And there you have it! The six beacons visible to Theophilus North (Thornton Wilder) from the Turret at Castle Hill. If you are staying in our Turret Suite today, you can console yourself that any of those beacons missing from the view were replaced by the magnificent view afforded of the Newport Bridge.

Posted on April 9, 2021 by castlehillinn