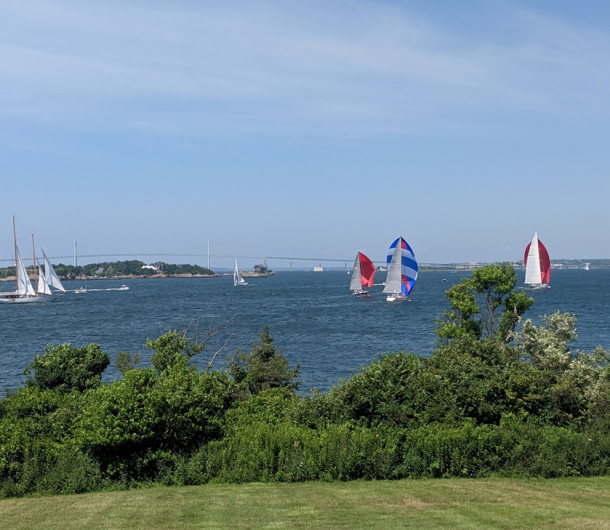 Newport is the sailing capital of the world and there is no better place to be a spectator to the action than the Lawn at Castle Hill Inn. People often say that coming to the Lawn is like entering a movie set due to the sumptuous setting and the stunning and picturesque background. Now cue the sailboats!

Of course, we are not just talking about any old sailboats here! In season, Newport hosts a regatta almost every day of the week — some featuring the finest boats and the best sailors in the world.

The 165th Annual Regatta of the New York Yacht Club, the oldest regatta in the U.S., kicked off the season in mid-June. Some of the racing took place right off our shores.

Whether the racing takes place in the harbor or in the East Passage of Narragansett Bay, that flanks the Lawn, or out in Rhode Island Sound, our panoramic views afford the best spot to take in these remarkable vessels, against that cinematic backdrop. When racing is out in the Sound, the participating boats provide a parade twice a day, as they go out late morning and return in the afternoon. They often glide up close to our property to show themselves off, as with the 12-meter World Championship in early July. The best show of sail so far this season came from the 175th Anniversary Regatta of the New York Yacht Club (whose Newport clubhouse is just around the bend from Castle Hill) from July 15th to the 21st. Each racing day afternoon the boats passed by in glorious form to the delight of everyone on the Lawn. In this regatta all participants have the same boat and it is wonderful to see them all grouped together as they return to the harbor. All the racing took place out in the Sound, visible at a distance, especially from our beach accommodations with their southern exposure. If you are staying in one of our beach cottages or beach houses, you might want to bring a pair of binoculars during regatta season. This regatta included a parade of sail around Newport Harbor on Saturday, which would have been best viewed from our harbor house accommodations, or from our house guest section of Adirondack chairs that face the harbor and the Newport Pell Bridge. No discussion about sailing in Newport would be complete without mention of the America’s Cup, which was held in Newport from the 1930s through the 1980s. We practically live for the day that it returns to Newport — where many will tell you that it belongs! Boats for this race are the world’s most technologically advanced and cutting-edge. They hover above the water now in case you didn’t know. New York Yacht Club American Magic (along with French aviation engineers) is developing and building the boat right here in Rhode Island for the 2021 America’s Cup which they hope will bring it all back! Stay tuned.

While enjoying the Lawn on any given day there are plenty of sailing vessels to enhance the cinematic tone. You can check here to see if there is a regatta happening on the day of your visit.