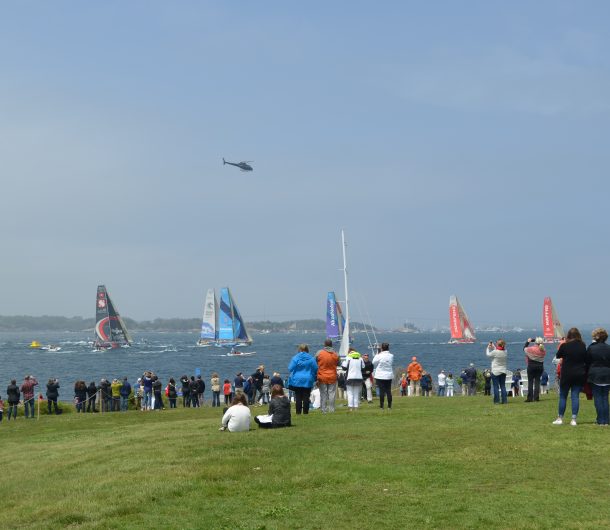 Growing up in Rhode Island, I often heard the phrase: “If you don’t like the weather, wait a minute.” It was an iteration of a phrase purportedly made by Mark Twain about the weather in New England. Regardless of whether he said it (or how he said it), the sentiment was certainly true this past May 20th when the Volvo Ocean 65 boats left Newport for Wales on the ninth leg of the Volvo Ocean Race and again on Friday June 15th on the day of the start of the Newport to Bermuda Race. Both days started unfavorably with dense fog on May 20th and rain through midday on June 15th, but then the weather softened and made for truly great spectating from The Lawn at Castle Hill Inn.

Two years ago, the previous Newport to Bermuda Race saw a lot of drop-outs due to a threatening weather forecast for the route. This year only one of the registered boats dropped out, leaving 169 boats in 17 classes sailing for Bermuda. Unlike the Volvo Ocean Race, the Bermuda race features amateur as well as professional sailors. In recent years, they have encouraged family and youth crews to compete in order to instill the ocean sailing tradition in the younger generation for a race that started in 1906.

The seven boats vying for supremacy in the Volvo Ocean Race have completed the final leg of the 45,000 mile trek around the world ocean. The Bermuda Race, by comparison, is 615 miles.

We were fortunate enough to get to know Bouwe Bekking, the skipper for Team Brunel, who visited us several times during the Newport stop-over. Bekking is a Volvo Ocean Race legend, competing in it eight times. His team has now come in third in the final standings, behind MAPFRE and overall winner, Dongfeng Race Team. The results are also in for the Newport to Bermuda Race. The 88-foot Juan K designed Rambler was the first to cross the finish line, followed by two Volvo Open 70 boats, Warrior and Wizard, then Proteus, a Maxi 72, and Elvis, a Gunboat 62. Elvis won the multihull division. Multihulls were added to the race for the first time this year. The first four boats to arrive are all in the same class, but the final standings are adjusted based on corrected times to allow for the differences between the boats. Rambler has the honor of coming in first but it is Wizard who has the top spot in the final roster.

It was a thrill to watch the races get under way from Castle Hill, but the most memorable moment for both race days was when the announcers (we are lucky enough to have a live commentary broadcast at the Lawn for both events) became enraptured of the improving weather conditions and were seemingly beside themselves when in full view of the beauty of the scenery surrounding the boats. And that is where you can find us every day.