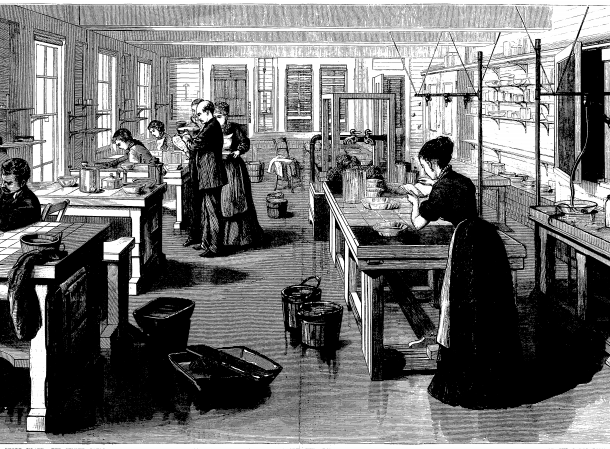 In the Society of Women

During the Gilded Age, wealthy Americans came to Newport to conquer society or be sanctioned by it, as it was the ne plus ultra for the fashionable set. In 1874, when Alexander Agassiz purchased Castle Hill and built his summer home here, the Queen of Newport society was Mrs. August Belmont née Caroline Slidell Perry. The Belmonts were reputedly the first in New York and Newport society to dress their servants in livery and employ a French chef – hallmarks for the lifestyle of the queens of society to follow – the formidable Caroline Astor, followed by the so-called triumvirate of Alva Vanderbilt, Tessie Oelrichs and Mamie Fish, who worked to outdo one another throwing outrageous dinners and balls.

At his summer home at Castle Hill, pioneering marine biologist and oceanographer, Alexander Agassiz was part of a different current in Newport society. Before the Newport summer cottages of uber-wealthy New Yorkers began to resemble European palaces and aristocratic country estates, there was an intellectual community of summer dwellers who combined the social inevitabilities of a summer in Newport with doses of erudition and culture. For the Town and Country Club, a visit to Castle Hill included a scientific lecture by Agassiz to supplement the social gathering. Other guest lecturers of the Town and Country Club included Mark Twain. There was nary a Vanderbilt or an Astor in sight.

Agassiz was surrounded by women for whom fashionable society was not their highest aim. He had lost his mother at a young age, which precipitated his move to the United States, along with his sisters Pauline and Ida, to join their father — the eminent geologist and zoologist Louis Agassiz — at Cambridge, where he was laying the foundation for an illustrious career at Harvard. Shortly thereafter, Louis married his second wife, Elizabeth Cabot Cary, an educator, who started a school for girls at which her husband and stepson, Alexander, would provide scientific lectures. Elizabeth Cabot Agassiz was co-founder and original president of Radcliffe College. She was also the lady of the house at Agassiz’s Cambridge home. That position in Newport was filled by his mother-in-law. Alexander had lost his wife and father in 1873, a year before construction began on the Agassiz mansion at Castle Hill.

Also by his side, in a professional capacity, at both the Museum of Comparative Zoology, founded by his father at Harvard, and the marine science laboratory housed in the Chalet at Castle Hill, was his personal secretary, Elizabeth Hodges Clark.

In considering the remarkable women in Alexander Agassiz’s life we cannot forget his sister Pauline, who originally had a separate house built at Castle Hill for her and her husband, Quincy Adams Shaw; however, they never moved in, and it remained vacant for five years until it burned down in 1880. Perhaps Pauline was too busy with her philanthropic and educational endeavors to commit to a summer in Newport.  In Boston, she founded day nurseries, kindergartens, settlement houses and established the first trade school in the United States. Furthermore, she served as president of the Boston Equal Suffrage Association for Good Government. She and her husband were also advocates for prison reform. All this left little time for cotillions.

Alexander Agassiz had three sons and all three followed in the footsteps of their father in one way or another. George, the eldest, was a zoology professor at Harvard (and wrote a book about his father: Letters and Recollections of Alexander Agassiz). Maximillian would accompany his father on his oceanographic expeditions. Rodolphe became the chairman of the board of the Calumet and Hecla Mining Company, which had produced the family fortune when his father developed it and presided over the copper mines. Brought up in wealth, especially for the younger of the three brothers, the pull of fashionable society was greater than it had been for preceding generations. Maximillian served as president of the top social clubs in Newport, the Reading Room and the Clambake Club, while his brother Rodolphe was a highly accomplished polo player, as well as a successful businessman.

One wonders what a daughter of Alexander’s might have become.

Posted on February 21, 2020 by castlehillinn